Today  our guest is the founder of Perth Stuckists Godfrey Blow.  He first joined the Stuckists in 2002, when he founded the Perth Stuckists after a conversation with Stuckism founder, Charles Thomson. He was also one of the featured artists exhibiting in the Triumph of Stuckism; an exhibition of new Stuckist paintings curated by Naive John, which comprised part of Liverpool's 2006 Biennial.

Here is an unedited interview with him.

Ghosts of the past,

Q: Tell our readers a bit about you. How did you start?

A: I was born in North Hykeham, Lincolnshire, England in 1948. My family moved to Sheffield when I was two years of age. Later on in high school I was encouraged by a kindly English teacher, who took our class for art, to look at Van Gogh's work. I was only thirteen at the time and knew nothing about this artist. I raced to the library after school and looked at a book on Van Gogh and was amazed. This set my course in life and I was determined to become an artist.

In 1971 I gained a BA Hons Degree in Fine Art from Sheffield Hallam University. From 1973-74 I  attended Manchester Metro University where I qualified as a teacher. My first solo exhibition was held in London in 1976 and followed by another in 1980. I emigrated to Australia in 1982. Numerous solo and mixed exhibitions of my work have been held in Western Australia since 1982. I have also participated in a number of mixed shows in South Australia, Victoria, New South Wales, Queensland, United Kingdom, India, China and Canada. My work is represented in private and public collections in Australia and the United Kingdom, including  HRH The prince of Wales, The Art Gallery of Western Australia, Artbank Australia, University of Western Australia, Curtin University, Sir Charles Gairdner, Holmes A’Court and the collections of the cities of Bunbury, Albany and Fremantle. In addition I have won several prestigious art awards in Western Australia. In October of 2006 I was a finalist in Australia's richest award for landscape painting, the Fleurieu Peninsula Biennial Art Prize, South Australia. In 2008 I was one of 30 finalists in the Doug Moran National Portrait Prize and was selected as Highly Commended, Runner-up. The exhibition was held in Sydney and traveled around Australia for the rest of 2008. During this year I was also a finalist in the Alice Bale Art Award in Victoria and the Tattersall's Landscape Art Prize, Queensland.

Q: Every artist has his/her own style. How long did it take you to find your style?

A: During the years I was at Sheffield Hallam University the work I produced was installation based. Shortly after leaving art school it was not possible practically to do this sort of work but I was determined to try and achieve the same depth of field through painting that I was getting with three dimensional artwork. Having looked around at current art of the time I felt much of the contemporary work was derived from American sources and styles. I wanted to create work that wasn't influenced by US artists; something that spoke of my roots and was more personal. It turns out much of the American art was actively supported by the CIA. and being left wing I wanted no part of that.

I started to look at the landscape around me, particularly the Dark Peak in Derbyshire. More recently Beauchief Abbey and the medieval ponds surrounding the Abbey in Sheffield have become central to my work. The ghosts of the Lady in White and Monk are said to haunt these places and I can well believe that. For me the Abbey and its surrounds exude a spiritual and haunted spirit. Many other places in Derbyshire are in fact sacred sites and consequently I became interested in spiritual matters including Celtic Paganism and Christian iconography. These things became increasingly important over the years. But how to express this?

I decided to use figurative images with abstraction to convey a certain message that conveyed a unique vision of the world. Over the years my art has  developed and I try not to let myself be satisfied with easy solutions.  I am constantly trying out new approaches, whether it be through colour, shape, concept, atmosphere or texture. The artist statement below covers most of the things I am endeavoring to create in my work.

“This is a vision that is transformative and reveals the magic and spirit of the land. Much of my work deals with landscape images from Australia, Ireland and the British Isles. The significance of the landscape is reflected in fairy tales, ghost stories and myths. My art links in with these and creates a symbolic and metaphorical language. The forests, fields, hedgerows, ruins, waterways and oceans feature strongly in my recent works. Figurative images are integrated into landscape forms which create works of imaginative power. The philosophy behind the artwork comes from the ancient pagan religions of the British Isles, combined with, and contrasting with Christian iconography. In many of the works there is an investigation into the part faith plays in our existence, whether it be religious or otherwise.” 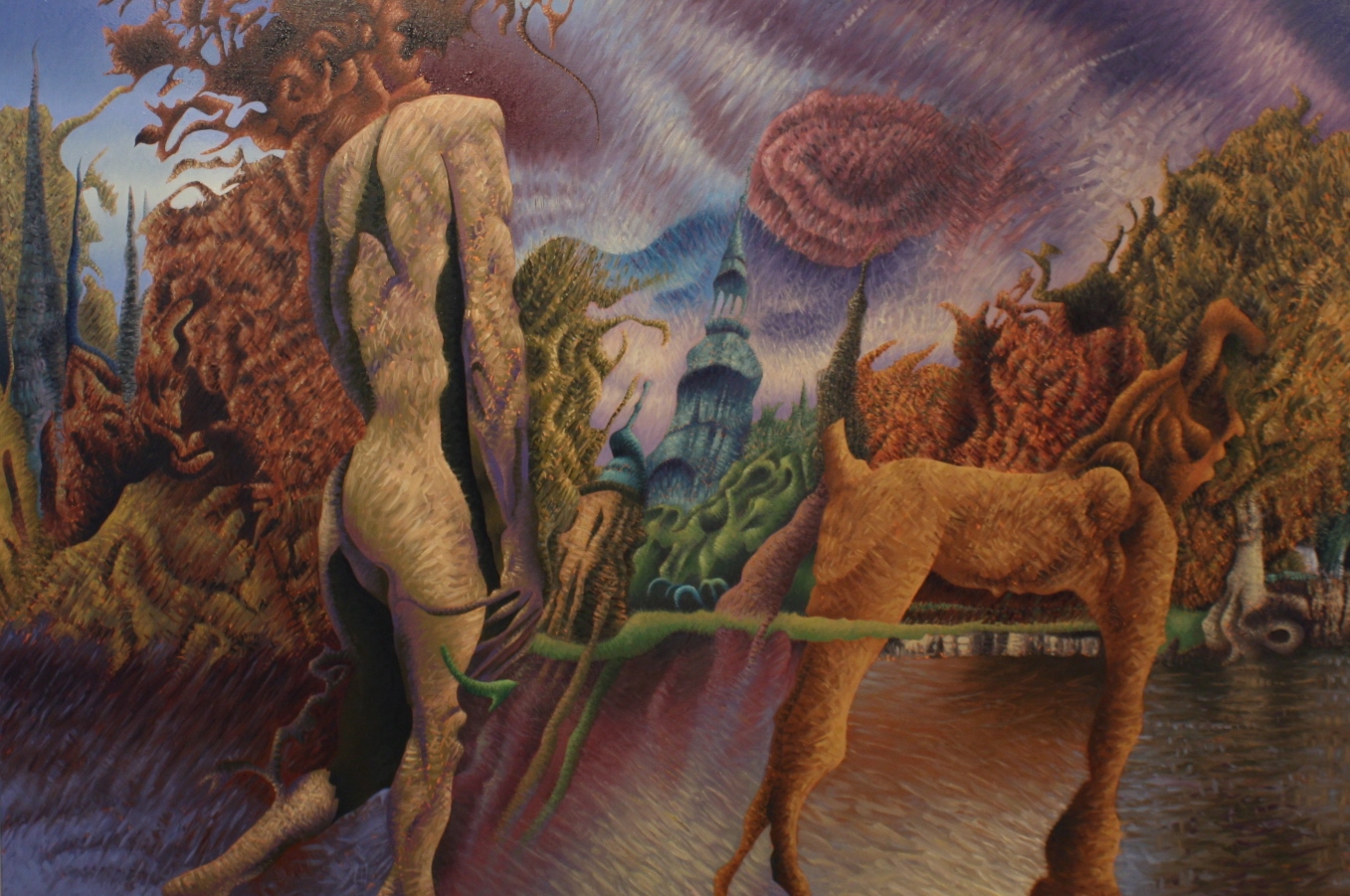 Formation of a new religion: dawn of creation,

Q: You are the founder of an international art movement Stuckist in Perth. What is it? How does it change art?

A: Stuckism started in London with Billy Childish and Charles Thomson. The movement challenges Conceptual Art and wishes to replace this negative, pretentious work with a fresh approach towards figurative painting. One of the quotes I like (from the manifesto) is: “Artists who don't paint aren't artists”. Many artists up until that point had stated on numerous occasions that “painting is dead”. This redresses the balance and more importantly states that without painting there would be no art.

I have been part of this movement for many years and have seen it grow into an international force with a lot of influence. Change is in the air. 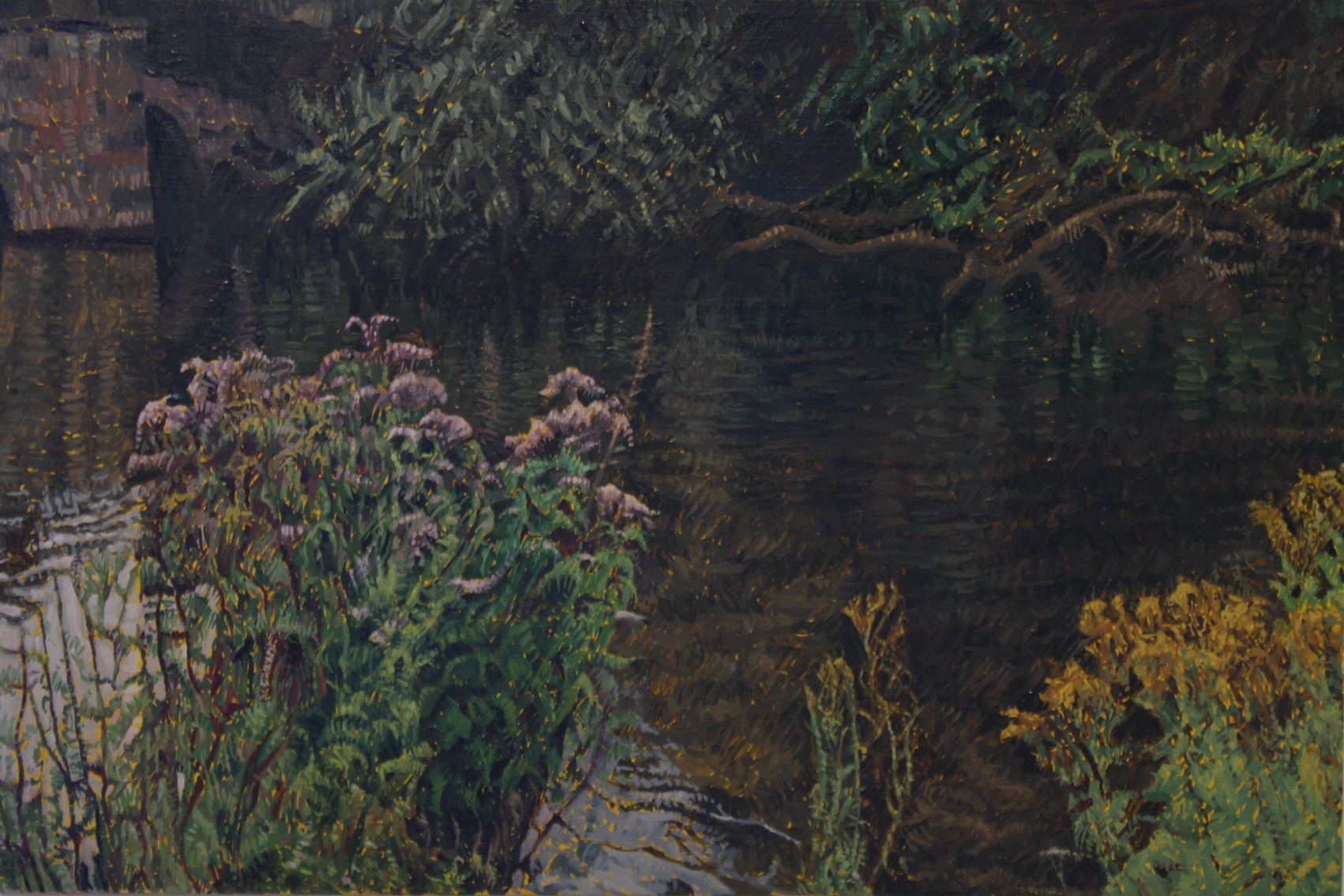 Q: So many exhibitions since 1976. What is the one you have best memories from?

A: They are all memorable in their own way. In my last solo show more people attended the PV than ever before  but I didn't sell any works on the day (two were sold later but still disappointing). The exhibition was favourably received and I thought it was one of my stronger exhibitions. It was more important that the paintings had a powerful impact than how many pictures had been sold.

Q: What do you look for when you’re looking for something to draw?

A: I use drawing to work out ideas for paintings and sometimes just in their own right. I look for something that corresponds to a certain vision I have at the time. It could be a feeling I have for the landscape and how inspired I feel looking at the object. Difficult to describe in words what really motivates me. Concepts for me often are about the things I am experiencing at the time and my reaction to these things.

Q: What is the most challenging part about being an artist?

A: The most challenging thing about being an artist is surviving to work another day! Often setbacks such as lack of money play a big part. This can result in a lack of motivation to continue. In addition having to explain to people outside the art world what I am doing is really difficult. 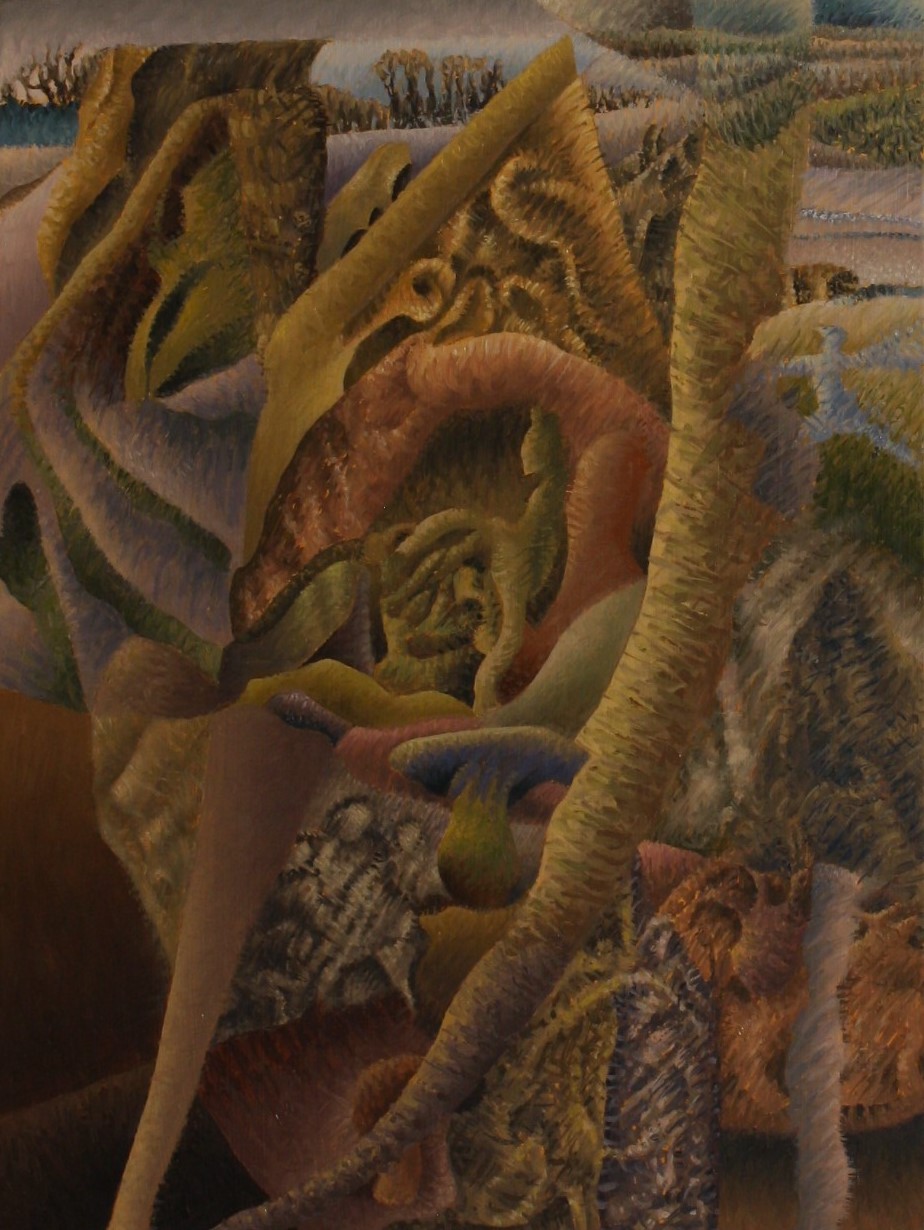 Q: Many years in art, hence many works of art. What is your creative process like?

A: For me I have to be interested in the subject matter and whether I find it visually stimulating. Sometimes things just fall into place and more often than not it's hard work. I usually start by doing a few doodles in a small sketch book and after that doing several detailed drawing in a larger drawing book, which I then photocopy and square up to transfer to canvas.

Q: What do you believe is the key element in creating a good work of art?

A: A key element in creating a good work of art is following a certain process, sheer persistence and belief you will succeed. Often paying attention to tonal and colour values is a great help.

Q: You have received many awards. What has been your greatest artistic success?

Q: Already many years in art. How has your style changed over the years?

A: My style has evolved naturally over a period of time. Sometimes changes happen due to circumstance, whether it be a personal setback/ triumph  or something I have observed about the world around me.

Edit and Export your Videos from "My Projects" Page

11 T-Shirt Mockups for Your Print-on-Demand Store