Greg "Craola" Simkins is a Fine Artist based in Los Angeles and raised on cartoons, well written stories, animal planet, graffiti and tattoos. It is his careful weaving of pop culture, the old masters, nature, carnival kitsch, and (most importantly) his warped imagination, that makes Greg Simkins a sought-after surrealist painter today. Simkins’ artwork has appeared in museums and galleries throughout the world.

Here is unedited interview with this talented artist.

Q: Some words about you. Where are you from, where did you grow up.. what was your childhood like?

A: I grew up in Torrance California which is a city in the South Bay of Los Angeles.

It is a couple miles from the beach and is a bit of a bubble although it is only about 30-45 minutes to Downtown Los Angeles. I was a bit of a shy kid growing up, hiding behind my glasses and a sketchbook.

I decided at an early age that I was going to be a veterinarian and had my path in life set in that direction. I got good grades in school, took animal care classes extracurricularly and began working at the age of 12 to save money for college and such. I was always drawing, since the age of around 4, and it was my number one hobby and past time. Whether or not is was good is another question, but it was a good way to channel my creativity and my over active imagination.

It wasn't until I was 17 years old in high school that I was introduced to a book called "Subway Art" that I got obsessed with graffiti and began doing it myself. It catapulted me into various circles of friends who were obsessed with art as well and really impacted my choices in life, including changing my focus to art as a career and studying illustration and studio art in college as opposed to veterinary medicine. The obsession with animals remained though, however I felt satisfied in drawing and painting them. 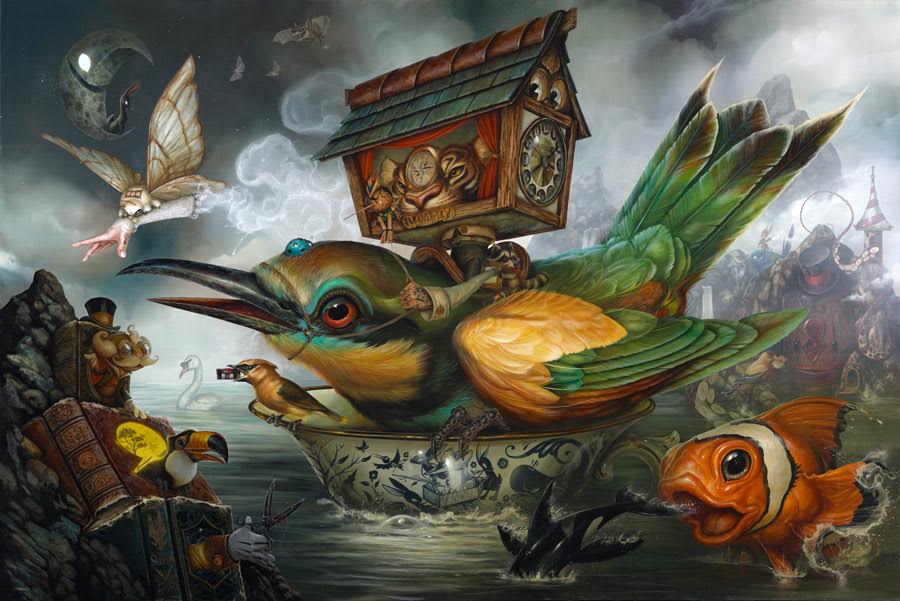 Q: Which artists influenced you, your thinking and career path the most?

A: Early in life it was the coffee table books we had. Salvador Dali and some art history books which featured Hieronymus Bosch, Caravaggio and Rembrandt grabbed me and would re-insert themselves into my life later on, but early on it was old cartoons like Popeye, Disney, Warner Brothers, you name it, as well as comic books, Dr. Seuss and old cartoon movies, especially "Water Ship Down" and "The Phantom Tollbooth".

Later in high school it would be Tim Burton and Robert Williams, and anything in Heavy Metal magazine and Juxtapoz. Once graffiti was introduced to me, it was Seen and Dondi and then all the cats from Los Angeles including Mear, Risk, Slick, Saber, Axis, Natoe, Plek, and many more. In junior college I had to take a number of art history classes so those old coffee table book artists were reintroduced at a pivotal time as well as the trips we took to museums instead of football games as a kid.

It's hard to sort all the influences because they came in so many forms. Tattoo art and scientific animal renderings as well as old advertising art are packed away in my memory banks as well. My brain is a confusing maze of fantastic and sometimes horrific passages that I have to carefully navigate through. I was prone to terrible nightmares growing up and found myself dealing with the monsters under my bed by drawing them, hence the website title "IMSCARED.com".

Q: Each profession has an influence and changes something in society. What role does the artist have in society?

A: Everywhere you look there is art. In the form of advertisements, to the graffiti that is fighting the advertisements, to the movies and entertainment we enjoy. It is nearly impossible to not have some sort of art in front of you at any given moment of the day. With fine art, a collector defines themselves by what they choose to select for their walls in there dwelling spaces.

People dress themselves in fashions that identify who they are to the world around them which were also designed by artists. Artists can put a face to a movement, give a target to identify with, they can inspire stories and movements as well as enhance ones that are already established. They creating a world or movement without art involved. It's impossible and boring.

Q: Art demands a lot of creativity. What does “being creative” mean to you?

A: That's difficult to answer. I always considered that being creative is in answer to the creativity we were given. It is a response to the worldaround us and trying to make sense of what we take in through our eyes, ears, touch, smell, and taste. But there is one step further. It's when an artist attempts to make that thing no one has ever dreamt up before, that's creativity. 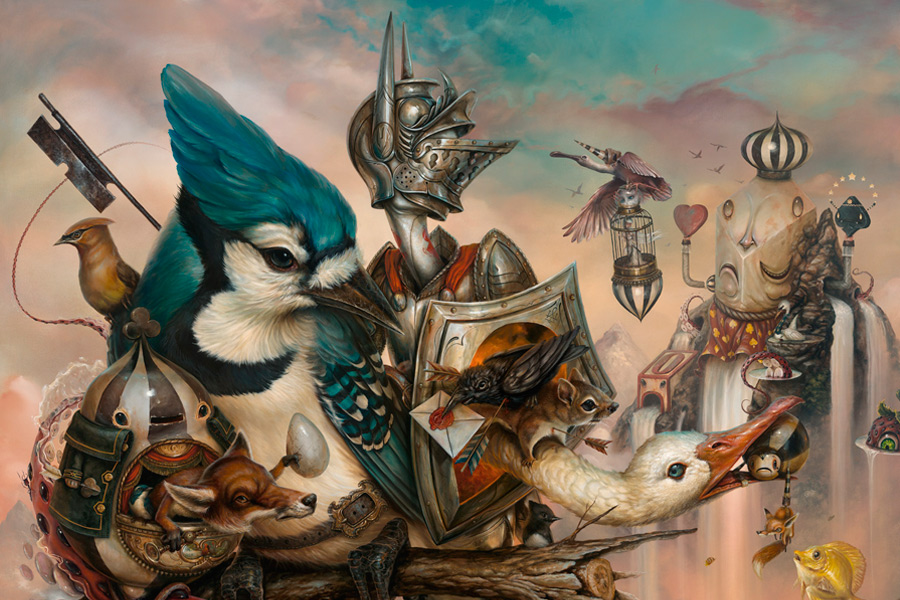 Q: Creating a work takes a lot of time. How do you know when a work is finished?

A: All I can say, is it is instinctual. You just know.

Q: Life is full of challenges. What has been the most challenging moment you've experienced as an artist?

A: It would probably be in the proper balance of time. I am always a bit on the anxious side due to deadlines and also wanting to give a proper amount of time to my family. So I would say the clock is my friend and enemy.

Q: It is interesting to know how do artists look at their works? What do you feel when you look at your works after finishing them.

A: I get different feelings and emotions with each piece. They all feel like a battle that I am trying to win, sometimes I feel defeated and need a week away from them at which time I can

happily take in the details.

My favorite way to view my work is to finish it, varnish it and send it off to photography and framing. I don't really want to look at it too closely at that point. My favorite moment is walking into the gallery once they are all lit perfectly and in there frames on the wall and then I can see the whole body of work completed. That's my favorite way to view them.

Q: The work of an artist is not an easy one. What are the difficulties that artists face?

A: This could be a long essay in itself. I am just going to say it's the inner struggles, the insecurities of it all. I always feel like a fraud and that the curtain is going to be pulled back exposing this fact. The time stresses that I mentioned above, and the feeling of always reaching for that next level of technical awareness that is always out of reach. These are things that keep me up at night at times.

How to Create a Slideshow with Renderforest?

10 Animation Styles: Which One is Your Favorite?