How to Create a Storyboard for Your Videos?

A storyboard gives a rough idea of what a video is going to look like. Many production companies spend so much time on their video storyboard that they can superimpose their storyboard images onto the final video, and they almost match.

However, such storyboards are highly finished and are a little more advanced than what you will need for a marketing video.

Most storyboards get started rough; then, the process begins where a great many designs, redesigns, and finishes are endured before the final storyboard is complete. In this article, you will learn how to get started with creating a storyboard for marketing videos.

Be Very Careful What You Add to Your Storyboard

We all understand that the storyboard only gives the general idea for the video and is not a substitute for a director. It doesn't provide detailed descriptions on shot angles, scene tracking, or any of the other technical stuff. The storyboard is a product that gives the directors and creators something to work from.

Be very careful about what you add to your video storyboard. There are quite a few examples where the end result turns out very similar to the storyboard, and that is despite the fact that the storyboard creator was only creating a rough draft to be improved, honed, and polished.

Two classic examples of this video storyboard faux pas are from The Simpsons and South Park. The very first episodes of the Simpsons have terrible character drawings, and that is because the animators were making copies of the rough doodles that Matt Groening was quickly scribbling into his storyboards.

The South Park team used to create very rough storyboards, and quite often, their storyboard placeholders ended up in the show. A great example is during the dodge ball episode. On the storyboard, one of the creators had simply drawn a small stereotype picture to represent the Chinese players. The idea was that the faces would be tailored and designed later, and the stereotype doodles were just placeholders to set one team apart from another within the storyboard squares. However, the animators thought that the stereotype image "was" the joke, and so animated the image into the show.

Luckily, the dodge ball episode was released in 1997, which was a more enlightened era, which is why social media didn't "blow up" because of a racial stereotype joke.

Storyboards are not a way to develop the story of your video. You need to know precisely what you are going to say before you get started with working on the storyboard. What are the objective and the key messages of your video marketing strategy? Answer this question, and then establish the structure of your storyboard. There are two ways for it: the “Hero’s Journey” and the “Problem - Solution” approach.

Does your marketing video have a hero? If yes, you need to introduce them and document their story in the storyboard. Break down the story arc and its development. Here’s an example:

You don’t need to capture every scene in the storyboard. However, make sure to illustrate the key scenes of the video. A good way to check this is to imagine someone, who hasn’t read the script, looking at the storyboard. Will they be able to understand what’s happening in the video? If the answer is no, you need to add some more frames.

If your story is about your product and doesn’t have a hero, go with the “Problem-Solution” approach. The main aim here is to accentuate the problem, and then present the solution you offer. Here’s how the basic structure of it will look:

Start with Pencil And Paper

Most professional companies start with pencil and paper, or they start with a large whiteboard where people pitch ideas, and one person writes on the board. Whatever you choose, you should not begin with professional computer imaging or even with Microsoft Paint.

It simply takes too long to create something as simple as stick figures if you are using a computer, and the amount of time between one storyboard image to the next is enough to stifle even the hardiest of creative talent.

Learn how to make a professional-looking storyboard on your computer, but always create your first drafts with a pencil, paper, or a whiteboard. Making use of storyboard templates available online can simplify the process further.

You may label each square on your storyboard and then write dialog or content for each square.

Do not try to write all the dialog in the square or under it. Have a professional check your work before submitting it to production companies, especially if English is not your first language, and your written English is not perfect.

This means the team of creators have a rough idea of what is going to happen, and they create a set of storyboard images like the ones below. Then, the creators and animators get together and decide what is said, what happens, and how it happens.* It is a little like a god creating a skeleton, and then calling a committee of angels to discuss what organs go where. 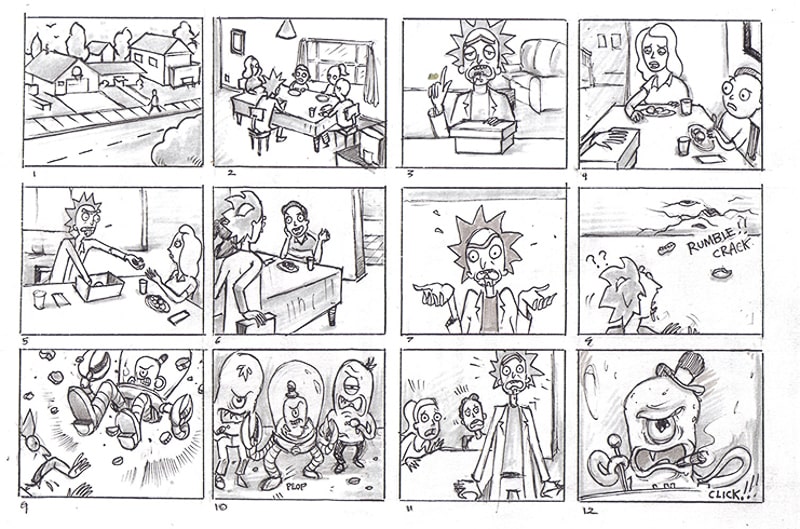 Notice how each animation storyboard square establishes a certain scene and a shot of the video. Notice how, in some shots, you can tell who is the center of attention and who is doing the most movement by how the shot is composed. It is up to you if you want to create a shot-by-shot storyboard, or if you want to do what the Eatcho creator did and change scenes whenever there is a new piece of dynamic action. For example, square three could have included several shots of Rick talking.

* Many feel that Rick and Morty's fresh and improvised nature is due to the fact that it is board-driven so that imperfections and nuances are not polished like they are with most scripted sitcoms.

You Are Not Drawing A Comic

Storyboarding is not like drawing a comic. Some comics rely on text and reaction shots, and some rely on artwork to make a point. For example, the Dilbert and Bleach examples in the image below show how some comics are worlds apart. 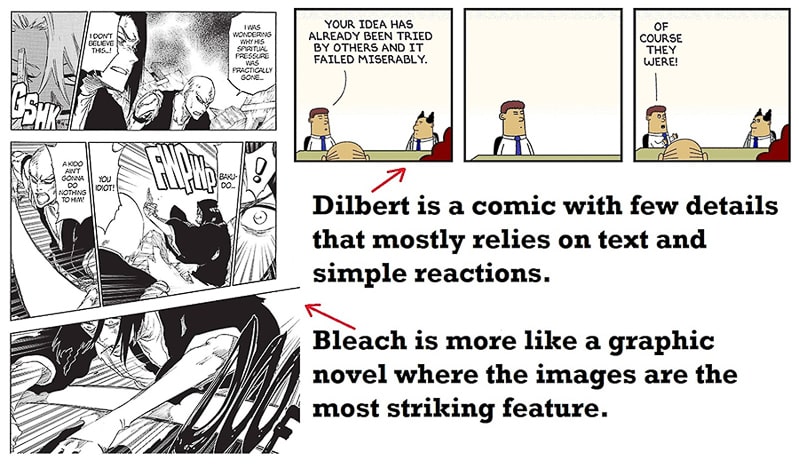 Yet, when you create your storyboard, your end result shouldn't look anything like Dilbert or Bleach. It can even be composed of stick figures, as long as you make sure the scenes are framed correctly. As mentioned in the introduction, think of your storyboard like frames that have been taken from your finished video. Imagine your marketing video is already complete, and you go into the future to steal a few frames from the most important scenes in the video...That is what your storyboard is.

Remember to Compose Your Shot With Consideration For Your Viewers Attention

Keep in mind that your video is not like a comic, which means your viewer’s attention can only rest in one place. With comics, the reader is able to look at the entire square and take it all in. However, with a video, your viewer cannot see everything. They can only focus on one thing, so you need to create a storyboard that understands and uses this feature. In the image below, all of the areas that viewers will focus on when watching the video have been highlighted.

Keep the viewers’ focus in mind when creating storyboards for your video because things outside of the focus may be forgotten and/or treated with contempt. That is why some viewers claim that watermarks/logos on TV shows severely damage their viewing pleasure; it is because logos steal focus from the show. Learn how to create a video storyboard where the viewer’s focus is managed and even controlled.

If done expertly, you can create magic by drawing focus and understanding how the focus/attention is drawn and moved. For example, in the movie “Insidious,” there is a classic jump-scare that most people remember. It is so memorable because of how the shots were set up so that your focus is hijacked against your will. The image below features two frames from the Insidious movie. 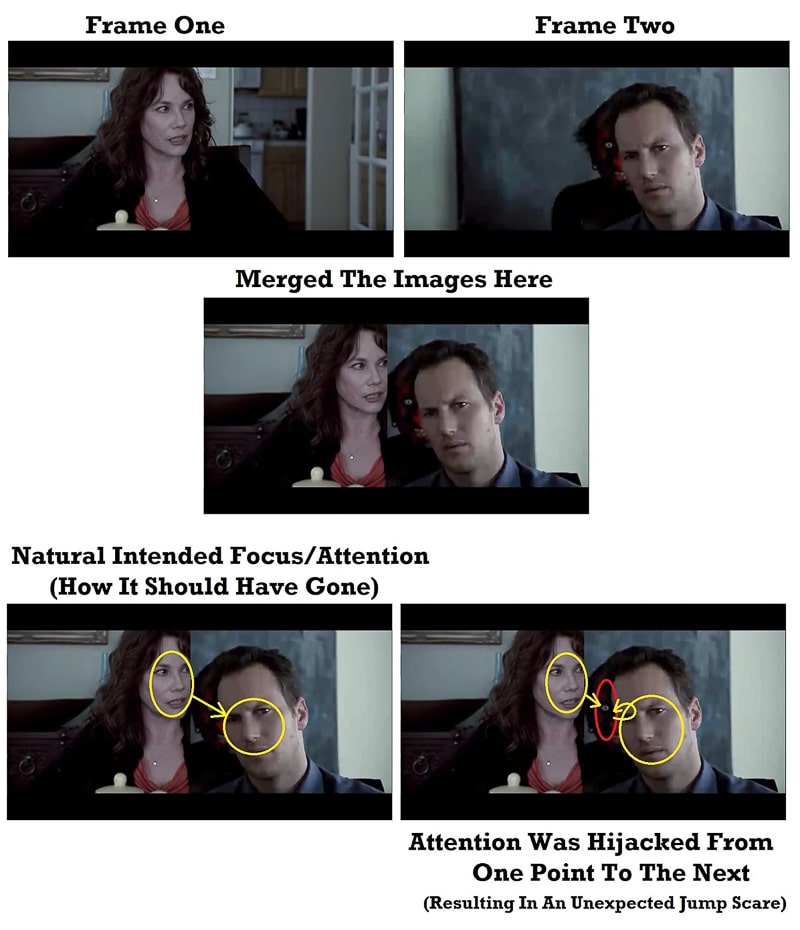 In the first frame, you are concentrating on the woman’s face. The scene changes and your focus naturally shifts slightly to the right to look at the man’s face. However, during that millisecond from looking where the woman was to looking where the man is, your attention is unexpectedly hijacked by the fire demon sitting behind the man. This results in a jump scare, and it was all done by controlling and hijacking the focus/attention of the viewer. If the fire demon had been just a bit more noticeable/brighter, this jump scare may not have worked.

Write and Draw Your Types Of Shot

When you draw out your scene, you are giving the director a rough idea of the type of shot you want in each part of your video. Still, you have to remember that perspective is subjective, especially when you are dealing with a moving image and either moving targets or moving cameras. Annotate at the bottom if this is a medium shot, wide shot, or maybe a tracking shot that comes in from the left, and so on.

It Is Imperative That You Understand Your Storyboard 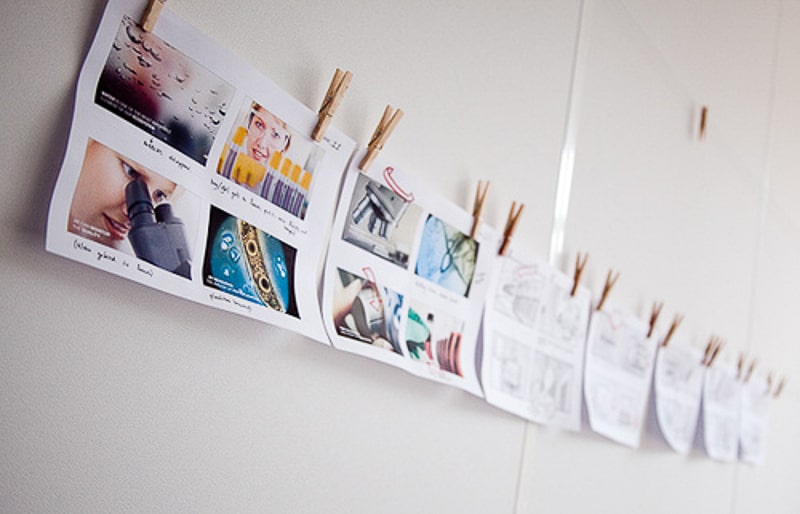 Conclusion – Build Your Own Storyboarding Method and Reuse Your Old Work

The more you get to grips with how storyboarding works, the easier it becomes because you understand all the tools, you understand your own notes, symbols/icons. And because you have a backlog of storyboard templates that are full of the old drawings that you can whip out every time you need it. This will streamline your video marketing strategy in the future.

Mary Whitman is a writer and editor based in Adelaide, South Australia. At her odd moments, she is taking full advantage of creative writing and blogging.

How to Harness the Power of LinkedIn Video