It goes without saying that earning money on YouTube is possible. As a result of consistent and quality work, anyone can find success on YouTube. The only question is: how much do YouTubers make? Or, how much can you really make doing video marketing?

There is no single answer for this, as it depends on many factors including video views and subscriber base, income streams, ad revenue, affiliate programs, merchandise sales, and sponsorship deals.

Basically, how much money you are going to make on YouTube depends on your channel itself, your location, and how much time you are going to invest in it. On average, YouTube monetization for 1000 views (also known as CPM – Cost Per Mille) ranges from 0.5 to 6 USD based on the location of viewers and the target audience. The numbers vary a lot, but most channels get paid 0.5 USD per 1000 views.

Getting enough active subscribers and viewers in order to make money for a living on YouTube is not easy. If you want to know more about how much YouTubers make and how you can engage more people and make money on YouTube, keep reading because this article is all about it.

Making money online is a convenient way for millions of people to make money by monetizing their skills, resources, and talents.

Founded approximately 15 years ago and with over 1 billion hours of video watched every day, YouTube is the perfect place to start a video channel and try to monetize it.

On YouTube, you make money based on the number of views. But before you ask “How many views do you need on YouTube to make money?” let us clarify that you don’t get paid for the video views, but rather for how many views ads get.

Also, note that the YouTube Partner Program requires you to have at least 1000 subscribers before you’re eligible to monetize your YouTube channel. YouTube doesn’t pay for the number of likes on a video. However, the likes convince the YouTube algorithm to push a channel forward. 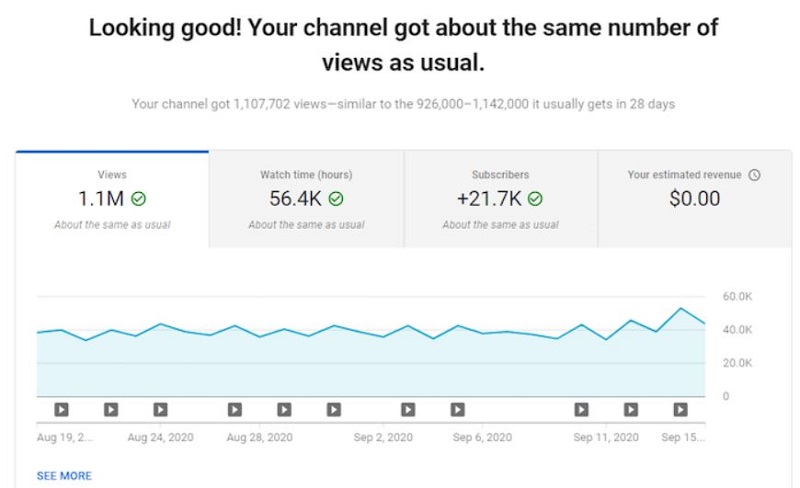 The average rate of the CPM is the average rate for 1000 ad views. So, in order to maximize your ad revenue, you need to build a loyal audience to have higher engagement, and upload videos consistently.
You can start a YouTube channel at any moment, but to succeed, it’s essential to have a plan from the start and pay attention to the quality of your content from the very beginning.

Successful YouTubers usually start their video with an intro, which often becomes their trademark. There are many YouTube intro makers online that can help you to create a high-quality intro that will give your videos a professional look.

For a successful intro, you also need to have a logo that sets your YouTube channel apart. This can be achieved just as easily, with the help of logo maker tools available online.
The direct way to earn money from your YouTube channel is by associating it with an approved AdSense account. However, not all videos are eligible for monetization. Make sure you meet video monetization policies and YouTube Advertising formats to use this service.

How do YouTubers Get Paid?

Once you have more than the minimum amount (usually $100), your earnings will be transferred directly to your bank account on a monthly basis. In a few countries AdSense issues checks, but they opt for direct deposits for most of the supported countries.

On YouTube, the secret to success is to make videos that are highly engaging and appealing to the people who may watch them. Each view, like, and comment send a signal to the YouTube algorithms that your video is appealing, and as a result, YouTube will send more traffic to your channel.

Take JennaMarbles – one of the most popular YouTubers. With about 1.7 billion total video views, the net worth of the YouTuber is around $8 million.

Except for paying attention to the quality of your video content, you also need to optimize your channel to rank high on YouTube and improve your visibility. Research and learn more about how you can optimize your YouTube channel and video descriptions.

Promoting your YouTube channel and videos on the web is another way to increase views, which will transfer into an increase in income. Make sure to share your videos on your social media pages, embed them on your website or blog: all of this will increase the number of people who will watch your video. Make sure to plan out all the details of your video marketing campaign. How much you will get paid on YouTube depends on your efforts to publicize your channel.

Once you have created an active YouTube channel, you can apply to become a YouTube partner. If you’re granted a partnership, you can access a large variety of content creation tools and get an opportunity to win prizes based on the number of views you have.

You can apply for the membership anytime, but to make it to the top-rated partner programs, you should have accumulated 15k hours of video watch time over the last three months. In this case, YouTube starts to recognize your eligibility even before they check your application. 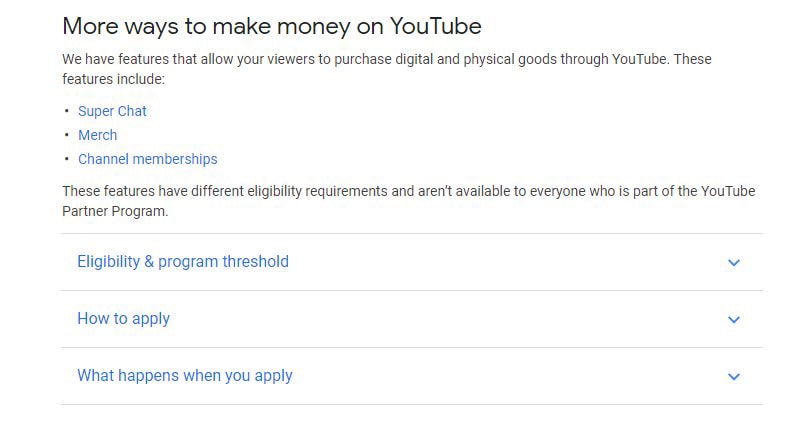 Why having a large and loyal audience is important, however, is that someone with 10,000 subscribers has higher chances to get 1,000 views than someone with 1,000 subscribers. What comes to video advertising, advertisers pay only when people click on the ad or if they watch the video for at least half a minute. This means that if your video gets millions of views, but no one clicks on the ads, you won’t make any money.

YouTube Analytics provides a wide range of reports and metrics for you to monitor the progress of your videos and channel. A variety of YouTube stats and reports, including Traffic sources, Watch time, and Demographics reports, are available. You can check the metrics both on a computer or your mobile device.

YouTube view statistics keep you updated on your account earnings, and you will only get paid if you fully comply with YouTube’s payment threshold.

Another way to make money on YouTube is affiliate marketing. Although most affiliate marketers don’t put enough effort into this method, it’s an effective way to generate significant revenue.

You may, like most affiliate marketers, be using static blogs to drive traffic to affiliate links. YouTube gives an opportunity to supplement this with an active channel that can be a primary catalyst. This is one of the ways many YouTubers make money with.

Another way to make money on YouTube is Super Chats and the recent addition to the YouTube tools, the Super Stickers. These paid features allow the viewers to highlight their comments during a YouTube live or video premiers. This allows the viewers to support their favorite creators and can result in a significant boost to the number of money YouTubers make. You can learn more about the features of each tool here.

Another way YouTubers with large following generate revenue on the platform is by producing their own merchandise. If you spend enough time researching famous YouTubers, you will notice that they produce merchandise in their niche. Jeffree Star, with his cosmetic line and famous tutorial videos, is a very prominent example of this.

The internet is gradually moving toward videos as the major form of content, and taking this step will put you ahead of the competition.

We already know the basics of monetizing your YouTube channel. But how much do YouTubers make?  Let’s take a look at the list of 10 highest-paid YouTubers of this year for a better idea of how much it is possible to make on YouTube.

Jeffree Star started his journey towards success on MySpace and now has his own makeup line. The beauty YouTube star then went on to create his own beauty line called “Jeffree Star Cosmetics.” His channel has over 16 million subscribers, earning $17 million last year.

David Dobrik is a 25-year-old YouTuber with over 18 million subscribers. His channel mostly consists of fun, entertaining videos, and pranks.

Stevin is a children’s entertainer and educator with over 13 million subscribers. His YouTube videos mostly have educational content for kids. He also has a second channel Blippi Toys, with over 7 million followers.

7-year-old Anastasia Radzinskaya was born in Russia with cerebral palsy. Nastya and her family have five family-friendly channels on YouTube, the biggest one of which is Like Nastya, with 76 million subscribers. The videos mainly feature Nastya and her dad playing with toys. The total number of subscribers of all channels surpasses 128 million. Through YouTube and her collaboration with toy and food brands, Nastya earned $18 million last year.

Preston Arsement creates gaming-focused content on YouTube. He started out creating content about Minecraft, now he runs several Minecraft servers. In 2019, he was one of the highest-paid YouTubers with an income of $14 million.

Markiplier is the gaming channel of Mark Edward Fischbach. With around 30 million subscribers, Markiplier is among the people with the most subscribers on YouTube. He started making YouTube videos in 2012. Aside from his “Let’s Play” series, he also uploads various comedy videos and vlogs, which brought him $13 million in the previous year.

Rhett and Link are the founders of a talk show “Good Mythical Morning,” where they taste unbelievable food combinations, such as mac and cheese sushi. The duo runs three other channels on YouTube, and according to Forbes, also acquired Smosh — another successful channel on YouTube.

A team of 5 men known as Dude Perfect combines sports and comedy in one YouTube channel. The channel has more than 56 million subscribers and earned $20 million in 2020, the same amount as in 2018 and 2019.

Jimmy Donaldson is one of YouTube’s biggest stars known for his eccentric content, expensive concepts, and huge giveaways. Currently, he has over 67 million subscribers and 5 more YouTube channels.

Starting in 2015 as Ryan ToysReview, Ryan’s World is a YouTube channel for children. Last year Ryan Kaji, the 9-year-old behind the channel, became the top earner on YouTube for the third year in a row, earning almost $30 million.

As of January 2022, Ryan’s World has over 31.2 million subscribers. In addition to his channel, Ryan now has clothing and toy lines and his own show on Nickelodeon.

You are not skeptical now, are you? None of these people became famous in one day. Their success and earnings are a result of constant hard work and dedication to create high-quality content regularly. You too can create unique videos that will bring you a loyal audience, success, and help you earn money on the platform. Work hard, dream big, and become successful.

How to Make a Music Video?